23 March, 2011 - 2:25 am | 23 September, 2013 Sister Marnie Kennedy
Marnie has surely been a person to whom we have all looked up to for a whole host of reasons, and others will speak to us later, reflecting on her life. Her spirituality in directing those who sought her wisdom of Spirit, her thirst for justice, especially concerning our indigenous sisters and brothers but not exclusively, her seeking of peace among people of all classes and in all circumstances and her great ability to relate to everyone with gentleness and humility. All these among other things. Marnie’s greatest task, among others, since coming to Redfern in 1987 was to be a bringer of peace and to support the Aboriginal community. She has surely been the Wisdom person of Redfern.

I am sure we all know and have known many great women in our lives. It is a matter of opinion who is great and who is not. Like Kate Middleton for example – most of the men here would have no idea who she is. Lots of the ladies I am sure would. Possibly the next queen of England. So be it. I am sure that all of us accept Marnie as being a great woman, and today we are celebrating the Funeral Rites of this very, very special person.

Deborah, who lived about 1150 BC, is one of the great women of the Old Testament. We read of her in only two chapters, four and five, of the Book of Judges. She ranks among the most famous women of the Old Testament. She was the only woman of the Hebrew Bible who gained renown on her own merit and not because of her relationship to any man. She relied on no man. She was renowned not only for her wisdom but also for her great courage. She was the only woman ruler of the Israelites. The only woman judge. All this before King Saul and those who succeeded him.

Like most of the judges she was regarded as a prophet who spoke ‘a word from the Lord.’ She was a woman of great wisdom and spiritual depth. One who contemplated God and discerned instructions from such contemplation and so made judgements accordingly.

As such her role was to seek guidance from God through prayer and meditation before making any ruling.

According to her custom, she would sit under the palm of Deborah and the people would come to her for judgement. In chapter five of the book of Judges, we can read of the ‘Song of Deborah’ that speaks of the victory of Israel over the Canaanites. It was her courage and wisdom in calling up an army to break control of the Canaanites that gave Israel forty years of peace. 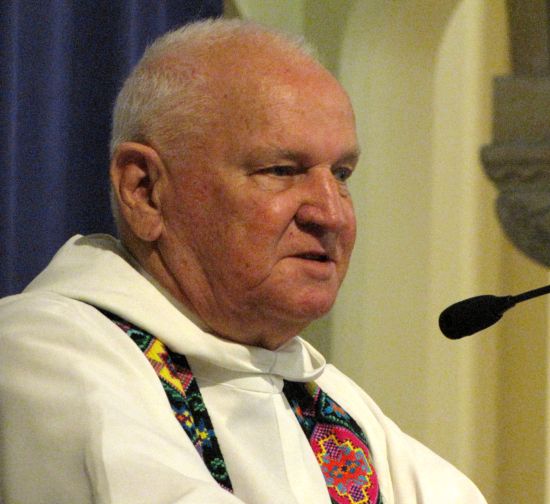 Well this is my Marnie, maybe different from yours, but one kind of Marnie anyway. We all look at her in different ways.

Personally, I have had the great privilege of sharing some of her sufferings during the past months. To have been able to provide her with the gift of the sacraments has been very special for me. To have anointed her and ministered the Eucharist regularly has been a great source of inspiration; such was her peacefulness, her prayerfulness and her calm demeanour during those difficult times of suffering.

She also had a great sense of humour. On Ash Wednesday, when she was in the Hospice, I anointed her for the last time, took her communion, and when I went to place the Ashes on her forehead she simply said: ‘Oh, not the Ashes dearest!’ – a little too much to bear. She loved a bit of news too.

She chose today’s readings. I believe it is true that what Paul tells the Ephesian people she regarded as fact too. It was through God that she was EMPOWERED by the SPIRIT with Christ dwelling in her and through that POWER she had been gifted totally with the LOVE OF CHRIST and filled with the FULNESS OF GOD. Therefore, she was enabled to accomplish more than could ever be imagined. Those accomplishments we celebrate today.

Again, given Matthew’s vision of things to come, having accepted that POWER of God throughout her life all is well. For she, in one way or another, literally, has given food to the hungry, she has given drink to the thirsty, she has welcomed the stranger and the other, she has clothed the naked, she has visited the sick and taken care of them, she has been to prisons and brought comfort. I know that she has done all these things because I, and you, are her witnesses. Thus, in whatever way it might happen, somehow or other, she will hear those words: ‘Come, you that are blessed by my Father.’

We commend her to her God that she might be with God where God might happen to be.

Judith 9:11 ‘For your strength does not depend on numbers, nor your might on the powerful. But you are the God of the lowly, helper of the oppressed, upholder of the weak, protector of the forsaken, saviour of those without hope.
Bookmark the permalink.